The next potential market is – everywhere

Improving connectivity in different parts of the globe is something that Maxim is passionate about. In this interview, he shares his first experiences with the Internet as an 11-year old boy in Russia and talks about what motivates him.

DE-CIX is a special company, and I like being a part of the team which makes the Internet a better place. Unlike architects, we cannot physically touch the result of our activity. It’s hard to say which meeting was the key one and what is the real value of all of those figures in the Excel spreadsheet and graph curve. I talk to people, find solutions, sign papers, and check graphs every day. But when I know that in some parts of the globe the connectivity has improved, that in a small village in Nepal or Russia people can talk to their nearest & dearest via IP-video/audio call, my soul finds balance, and I feel proud of what I’m doing in this world. 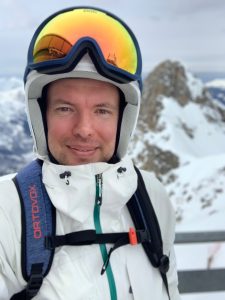 What brought you to DE-CIX, Maxim?

As always in life, everything interesting happens by accident. I moved to Frankfurt in 2010 at the age of 26 and was thinking about whether to stick with project management and engineering topics or switch to management and business development. In early 2012, I got a message from a former colleague telling me that DE-CIX was looking for a business development person to look after customer relations in Eastern Europe. I’ve been at DE-CIX for eight years already and love doing my part to contribute to its tremendous success.

What was your most significant professional success at DE-CIX?

Improving connectivity in different parts of the globe is something that I’m passionate about. I’m proud of brokering the signature of the partnership agreement between MSK-IX in Russia and DE-CIX in 2018, which made it possible for gaming companies to exchange their traffic remotely with local Internet providers. It’s just personally satisfying thinking of how gamers are now happy with lower latency.

In which market do you see the most potential over the next few years? And why?

When we talk about classic peering services, then the next potential markets are those with weaker connectivity and high population density. In my region, that would be Tajikistan, Uzbekistan, Kazakhstan, and neighboring countries. Saying that, with DE-CIX’s vision of the interconnection future, I’d bet that the next potential market is – everywhere.

Which were your favorite milestones in the development of the Internet?

One of my favorite milestones of the development of the Internet was when it became possible to interact with people from different parts of the globe. It’s incredible to think of how my 11-year old self could chat to people from other continents and different time zones – on my PC in the middle of the polar winter far away from any big cities. Nowadays, we consider it “normal” to be able to spend time with our grandparents – who live 3,000 miles away – on a video call, but this is a very recent development. The future is now, and we are lucky to have it.

What does the Internet mean to you personally?

I think that its integral structure and autonomy is the most significant achievement of the Internet. In the early years, people created and developed the Internet, and today the Internet changes us, our society, the way we interact and do business. I use the Internet very intensively; I’d say 90% of my daily tasks involve using the Internet. It’s how I provide for my family. It’s how I arrange trips and how I arranged my wedding ceremony in Bali. It’s how I interact with state authorities in Germany and Russia and do my tax returns. It’s how I make video calls with my family living so far away in different parts of the globe, and even how I order pizza and diapers.

“Its integral structure and autonomy is the most significant achievement of the Internet.”

Where did you get your information from 25 years ago?

I mostly remember myself digging through the Internet trying to find the information I was looking for, but libraries were always the primary source of unique and trusted information. We should not underestimate their value, even today in the era of “Internet everywhere”. On the one hand, there are tons of information online. On the other hand, the quality of this information is poor, and it needs to be carefully checked. This is one of the ongoing issues nowadays. In order to find the right information, you always have to check its source in order to not be a victim of targeted advertisements instead.

Did you have a computer at home?

Luckily, my father was keen on electronics, and since early childhood, I always remember there being some sort of computer at our home. The first one I was allowed to use was the USSR version of the Intel 8086 processor-based machine, the “Assistant-128”. It went into serial production in 1989, and it cost around a fifth of the price of a car at that time. The data was stored on magnetic tapes and floppy discs. Later, I had different computers with Intel processors 286, then 386, and 486. I always wanted more space on a hard drive, a better video card for better pictures, and a powerful processor for performance. Personal computers were very rare in homes at that time.

What was your first experience with the Internet?

There were no search engines in the early days, and you had to know the domain name to open a specific page. The first website my father showed me was https://www.whitehouse.gov, and for a while, that was also the first page I showed my friends explaining the phenomenon of the Internet. Back then, there were no banners and no context advertisements: just pure virgin Internet. Nowadays, we enjoy high-definition video calls and online games in the cloud, but the Internet knows everything about our actions and preferences.

“Back then, there were no banners and no context advertisements: just pure virgin Internet.”

25 years from now: What will interconnection be used for?

I personally believe that structural change will come from the Internet. Interconnection will determine and underly the interaction between humans, devices, and larger-scale systems. We could have scenarios like this: The vehicle in front of you changes lanes suddenly. You then have to decelerate abruptly. This intensive usage of your brake pads is then calculated in cryptocurrency and automatically deducted from the account of the driver of the other vehicle, whose maximum allowed speed is also then automatically capped for a certain period of time.