“In the future, interconnection will still be one of the most important services”

“In the early days when I first met the Internet, it was different.”

Interxion has been there from almost the very beginning of the DE-CIX story – offering room and board to the young exchange in their first Frankfurt data center. And the mutually beneficial relationship has stood the test of time. We spoke to Jens Prautzsch, Managing Director of Interxion Germany, about that friendship, his involvement in the development of the Internet, and what he thinks the future will bring.

Back in 1995, at the time when DE-CIX was first founded, what was your own relationship to digital technology?

Well, there was very little relationship to technology. I was working within the Federal Armed Forces, so analog was more of the game than digital. My first experience with the Internet was a little bit later, at the end of the 90s, when we had the first computer at home, and also at work. It was kind of strange, because on one side it was a totally new world, and on the other side, you thought: This is something very special.

If we think today about the Internet, it's seamless, it's everywhere, it's easy to use. In the early days when I first met the Internet, it was different. It was quite loud (you had the sound of the modem) and slow – you could go away and get a coffee and then come back, and something might have started by then. It was not as easy as it is today. You didn't have a Google page or something like that to start searching, so it was more difficult to find information and data you were looking for. But nevertheless, it was exciting.

What, in your opinion, is the Internet's greatest achievement so far?

From my perspective, the Internet's greatest achievement so far is twofold. First of all, it's connecting people, bringing people together, offering them the opportunity to communicate, to chat, to send messages - bringing them close to each other. It's parents, it's their children, all communities we can imagine. The second point is more about knowledge sharing – getting access, wherever we are, to the knowledge we have, to new information. That's really a great thing.

But when I think about the Internet, it's not only about services we know today and how we do things today with the Internet. It's also about how we did them in the past. When I was growing up, for example, I was listening to music using my record player. Then, of course, digitization took place and I used the CD player. The next phase were iPhones, iPods and so on. There was no need to hold something in your hand, to have a physical product. We had to make that journey, especially if you're my age. My children, if you ask them today about records or CD players, they simply smile.

How have you helped in shaping the Internet over the last 25 years? 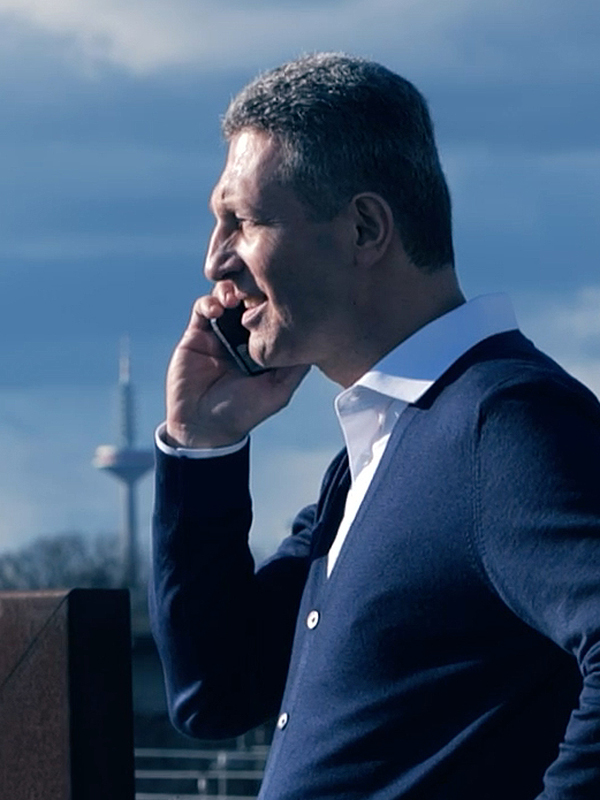 The Internet at the end is a great network, but it consists of a lot of fiber lines. My past in helping to shape the Internet is coming out of the digital infrastructure. First of all, I started out working in the mobile industry for more than seven years. At a time when mobile phones did not provide Internet access – so simply mobile phones. Then we got messaging and then we got the iPhone. I was part of this phase of bringing UMTS and LTE to the market and enabling people to use phone as a kind of a middle point for their lives.

After that, I changed my career path and I went to a fixed-net provider and started building fiber networks. So, really bringing the fiber access to the households, to the homes, but also to companies. And now I'm in a third phase – the next phase of digital infrastructure, running data centers, connecting the companies and offering this kind of service.

What was a peak moment for you in the development of the Internet?

For me, the most impressive point was clearly the launch of smartphones and at the end of the iPhone, because we had been thinking about it all the time. We had considered that this could be the way to go. And when Apple launched it, this was a tremendous point of time and it was great to be part of it.

In earlier times, the digital infrastructure and all the networks were based on exchanging minutes, only exchanging data to a certain extent. From that on, we needed to bring the capabilities of the network closer to the customer. And that was one of the most important changes.

YOU CAN TOUCH THE INTERNET - video interview with Jens Prautzsch

“DE-CIX perfectly fits into our strategy in building communities.”

As the Managing Director of Interxion, what can you tell us about the relationship between Interxion and DE-CIX?

I was not part of the early days of Interxion, but those stories are, of course, part of our heritage and part of our culture even today. In the end, Interxion was closer to a telco business than a data center provider back then. The partnership of DE-CIX and Interxion started in those early days, and I think even today, both companies really benefit from each other. We started with DE-CIX by building FRA1 as the new home of DE-CIX. In those early days, the most important topic to solve was bringing carriers to the campus and enabling the first companies to come here and find their home in a kind of a colocation business.

In the end, the Internet is a network, nothing else. And helping companies to connect, bringing carriers to a central point, and enabling DE-CIX to grow so strongly through this is one of the most important contributions that Interxion made in the past.

Interxion is not simply a colocation provider. Our main asset and USP is the high number of carriers, but also the strong relationship through the Internet exchanges. So DE-CIX, as the most important Internet Exchange in the world, with the highest traffic here in Frankfurt, of course, perfectly fits into our strategy in building communities and helping companies to connect.

What do you think the Internet will look like 25 years from now?

Well, that’s quite a difficult question. When we describe the Internet today, we say it's everywhere – we can use it everywhere and at any time we wish. At the end, I believe this will continue. We will have it everywhere, but perhaps we don't need a device – perhaps by then it will be part of us.

“Interconnection will be one of the main businesses and services in the future.”

What do you think interconnection will look like 25 years from now?

The value of the Internet is driven by the number of users that it has and by the quality of the network, the quality of the network is defined and can be improved by the number of interconnections you have. Therefore, the more partners that are interconnected in this Internet and use it, the more important the Internet will be itself. So, I believe interconnection will still be one of the main and most important businesses and services we will see in the future.