The “WOW” effect: How helping customers has that winning feeling

In DE-CIX’s anniversary year, Wim Henderickx from Nokia describes the winning feeling of having an impact, and how he supported the development of the multi-terabit platforms that keep the traffic flowing over the DE-CIX IXs today.

With DE-CIX’s 25th anniversary this year, we’re looking back to the beginnings of the Internet. Back then, you almost became a professional soccer player: How does someone go from that kind of calling to the telecommunications industry?

When I was young, sport was everything to me. I started playing soccer when I was three or four years old. I was not an especially good soccer player, but I was good enough that at some point people suggested I make it my profession. But, as happens, I got injured. I needed surgery on a number of occasions and started to question whether this was really good for me. I had a bachelor degree in telecommunications, and after three sets of surgery in a year, I decided to quit football. From then on, I focused on this career, which I’m still developing today.

"I can also drive our product development in a way that suits those customer needs. And that’s how you create impact."

What got you interested in the telecommunications industry in the first place?

What I like in general is to help solve problems. If you look at my career, I have always looked for opportunities to have an impact – be that in sports or anywhere else. Through working with a range of customers in the telecommunications industry, I get to see certain problems that could be solved, or come up with ideas that could have a very big impact if we realize them. That’s what I like the most about my job.

On the one hand, I can work with customers, where I can have an impact. I work on standardization – for example, in the IETF, as well as other standardization bodies over the years – to try to develop standards which ensure we develop interoperable solutions. Secondly, I can also drive our product development in a way that suits those customer needs. And that’s how you create impact. I am in the luxurious position that I don’t just work on the product – I can also work with the customer to actually make something happen, or realize our ideas in customer deployments. Then you get to see that it is really being implemented. I get a great amount of satisfaction out of all of this.

So, I get to cover a lot of aspects, and this broad spectrum is very exciting. You see that by doing what you do, you actually make people happy – or you see that you evolve in a certain direction.

How did your relationship with DE-CIX develop, and what impact have you had through this? 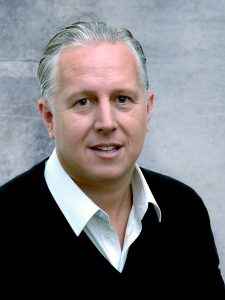 At the time when I first met Daniel Melzer at DE-CIX, we didn’t really have a product for, or a very high focus on, Internet Exchanges. Daniel tried to explain the challenges they were facing and what DE-CIX was after, and very quickly, the conversation turned to technology – we talked about things like SPB (shortest-path bridging), the technology to do layer 2 networking.

What was important for DE-CIX was that there was a lot of traffic, and they needed support with technology that could scale out very well and be very easily expandable. There was a lot of ECMP and parallel paths, because they’re running a multi-terabit platform – DE-CIX in Frankfurt, for example, runs close to 10 terabits per second data traffic these days. In order to support such a high volume of traffic, we had to go parallel, so we actually needed to have multiple things in parallel to achieve the required level of performance. I suggested a few alternative options to Daniel and it was clear that he was interested. And also, with the XRS, we had a product where we could connect multiple platforms together so they could connect their customers in a way that would scale out. This means that if you run out of port capacity on one platform, you can extend it to the next one.

"What was important for DE-CIX was that there was a lot of traffic, and they needed support with technology that could scale out very well and be very easily expandable."

So, we designed a platform that was expandable, and DE-CIX didn’t have to re-cable their customers when they were out of space on a single system, for example. All of this resulted in an architectural framework which we tested and validated extensively to make sure that what we had discussed actually worked in practice – which it did. During that validation process, it was clear that we had realized all the capabilities which we had discussed, and that resulted in DE-CIX selecting the platform as the next generation of their IP platform.

And how did it feel, having such an impact?

Very good. I mean, you have this “wow” effect. And this relates a little bit to my sports background, I have to say. Because winning a customer deal kind of gives you the same feeling!

How does DE-CIX fit into the overall strategy of Nokia?

Very well, I think, because there are not many vendors out there who make these multi-terabit scalable platforms. Connectivity is what DE-CIX is about, and that’s also what we are about. If you look at the starting point, our motto has always been to build the most scalable systems on the planet. And that’s also what DE-CIX is about – providing connectivity and making it easy to connect people. As such, there are regular meetings with the DE-CIX team where we look forward into the future, to make sure that we are on the same page and keeping up with developments. DE-CIX’s mission and our mission are very well aligned.

Tell us about your first experiences, as a user, of being on the Internet and experiencing connectivity from that perspective.

So that was dial up, and it was slow. I am always busy with the latest and greatest things, so from that point of view, it was not annoying at the time. But if you look back from today’s perspective, it was painfully slow – you just can’t imagine why we spent our time on it.

I experienced the Internet both at work and home, and this was my personal interest because I wanted to understand the technology and how it worked. With dial-up, it took some time before the connection was established, and what you could do with it was very constrained. And then we got to see it evolve. I mean, back then, I had a Commodore PC and an Atari game console, and if you look at devices today, it is like day and night.

"Today we are at 400 GE interconnection, but we are already discussing 800 GE, terabits, and beyond."

Looking back over the last two decades, what do you see as the key pivotal moments in the development of the Internet?

There are a number of things I believe have helped us get where we are today. The first, I think, is still speed – developing speed in various places. This starts with the backbone; then of course, the interconnection needs to cope with all the demands, and it goes all the way up to the access. When I was starting out, in the early days at Alcatel, I was focused on the backbone and the higher bitrate interconnections. But we were also very active at that time with DSL and PON – all of these access technologies – and getting more speed out of a copper line is another thing that has helped us to get here.

But, actually, speed is still evolving at various levels. Interconnectivity is still developing all the way along. Today we are at 400 GE interconnection, but we are already discussing 800 GE, terabits, and beyond.

The second important aspect is the devices and the CPUs which we have today. Here, I think the innovation of smart phones was a key moment. Before that, I had a BlackBerry – which was already very nice because you could check your email anywhere.

This “anywhere” is another key aspect. So, for me the third thing is the fact that these days the Internet has become wireless. We can connect anywhere from any place.

In what ways has Nokia influenced the development of the Internet?

I think there are several aspects to this. One is the focus on the wireless side. Nokia as a business is still typically mainly known for mobile phones, although we don’t produce them anymore. In this area, we helped the Internet with the evolution from 2G, 3G, 4G, and on to 5G. The second aspect is in the same spectrum: Through Nokia’s acquisition of Alcatel-Lucent, we own the technology for wired access, which allows us to have multiple megabits over a copper line, even up to a Gig in some cases. And then we have multiple fiber products that allow people to connect and have high speed broadband at their homes or businesses. 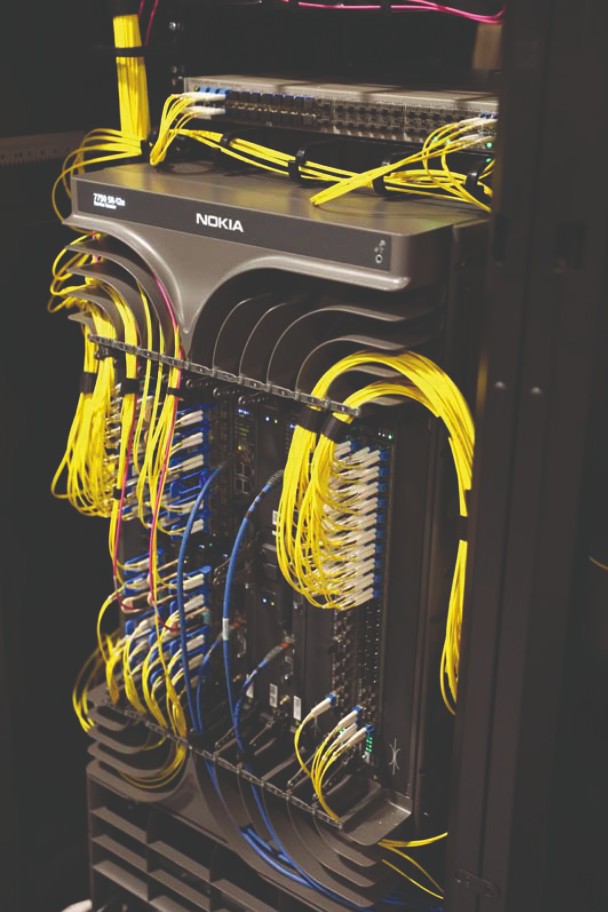 "Today we are building the largest routers that you can get on the market."

The third aspect is related to connectivity, which is more the business we are in, although we came to the market late. If you look at how the Internet revolution is typically depicted, there was a battle of different technologies which Cisco won. And they came in with what I would classify as enterprise-grade products, because that’s where the Internet or IP started. Then Juniper came along, and they built a hardware-based route which was focused on high performance, because the backbones started to come together.

If you were to classify Nokia at the time, what we did is that we saw the need not just for providing high-tech at speed, but for defining or building products to allow multiple services to be transported through the Internet in a very high quality and reliable fashion. That has been, I would say, our innovation. And as such, today we are building the largest routers that you can get on the market. We are one of the companies building devices that support the Internet and all the services which customers consume for their businesses, in mobile environments, fixed line, in all kinds of sessions. 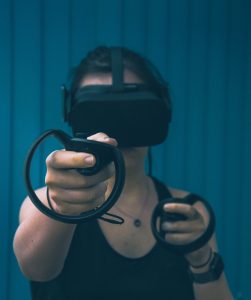 Looking forwards, twenty-five years from now, what will the Internet be like?

Probably very different, because 25 years is a long way away. But look at what innovations are happening today, like autonomous driving, or developments that let you feel the textures of textiles remotely before you buy, for example. We are going to see a lot of AR, VR, and cognitive realities appearing. The buying experience, and the way people do business, will change around these innovations. And we see that, due to latency requirements, those applications are moving closer and closer to the users and customers. And some of the evolution is based on these workloads, which need very fast reaction times between things. I also believe that space will play an important role. We see lots of innovation towards using space on satellites as an additional communication vehicle beyond just the terrestrial networks. So, yes, in 25 years, the Internet will probably be very different.

More on our partners: