Looking to the light

“I used emails a lot and another app called ‘ICQ’ – which was an instant messaging application, similar to WhatsApp nowadays.”

Electrical power, explains António Nunes, CEO of Angola Cables, is the basis of everything in the digital world, and the Internet is the foundation for all upcoming digitalization processes. We spoke to António about the educative power of the Internet, connecting continents with submarine cables, and the love at first sight between Angola Cables and DE-CIX.

In 1995, I was 27 years old. I was living in Macau, far away from my homeland. I was a young engineer with key professional responsibilities and with ongoing projects in Asia, working with electrical and power systems.

My academic background was in electrical engineering but I have always kept up-to-date with the digital ecosystems. My university back in Dresden was responsible for some of the research and development of fiber optics. In Asia, most of the projects I was working on had a heavy focus on digitalization. One of the most important projects I was working on was the construction of the remote operations center of the city’s power network. It was a technological mix of digital, telecoms and power systems. As a result, I developed my experience with communication systems early in my professional career.

I used to travel, sail, and dive all over Asia. Living in Asia at the time felt like having an amazing playground of places to explore and countries to visit. While I was living so far away from home, the Internet was a way to stay close to my friends and communicate with Angola on a regular basis. Back then, international telephone calls were very expensive. I used emails a lot and another app called ‘ICQ’ – which was an instant messaging application, similar to WhatsApp nowadays.

What do you see as the Internet’s greatest achievement so far? 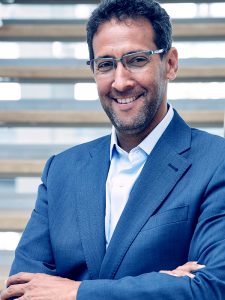 The Internet enhances society’s capability for learning and sharing knowledge. Children today develop cognitive skills faster thanks to the Internet. Schools are integrating the Internet into the learning process because it has an important role in enabling access to information and as a means of communication. Nowadays, my children often suggest to me, “go Google it” whenever I don’t have the answers to a certain question or subject. This direct bridge to knowledge opened by the Internet is indeed a great achievement.

I can see the impact that this digital inclusion has had on our younger generation. I remember when my first son was 6 years old, trying to play a new video game on our home computer. He called me asking which button to press to install it, and I told him to wait for me to come home from work so I could teach him. When I got home, he was already playing the game – he had managed to set it up all on his own with the help of the Internet, even though he was only just beginning to learn how to read and write.

I realized then that the Internet was opening new doors to the development of our children and making them less dependent on traditional learning processes.

In what ways have you helped to shape the Internet over the past 25 years?

Before joining Angola Cables, I was working for a company that developed the largest mobile network in Angola. We were able to develop and shape the Internet in the country. All of capital cities of Angola’s provinces had Internet connectivity through the implementation of 2G and 3G networks. I was part of a pioneering Angolan team, enabling Internet access across the country. With Angola Cables, the scope and nature of our work progressed. We built the Angolan Internet Exchange Point ANGONIX, which in only one year became the 3rd biggest IXP in Africa. Today, Angola Cables is recognized as one of the reference Internet service providers in Africa, with relevant business growth in Brazil. Our Internet quality is attractive to the major industry players and our Atlantic network is very robust. Taking everything into account, I am proud to be part of a team of people who boost Internet development and try to build a better and more connected world for everyone.

You’ve been with Angola Cables since the beginning -- tell us about the early days.

In the very beginning, Angola Cables was just one more project, managed by me, in my former company. It was the submarine cables project bringing five telecom operators together in Angola to build WACS. After the cable started its operation, we realized that much more could be done with all the capacity available. To safeguard the infrastructure profitability and return on investment, the shareholders proposed a new management model for the company and invited me to manage it. I accepted the challenge and transformed the dream into today’s reality.

For me as a manager, building a good team is always the most difficult task to achieve. Today we have a good group of people with a lot of potential, and we are always looking to provide training to leverage the team skills. Nevertheless, we’ve been able to achieve some major goals, including being able to deliver in Angola very good quality Internet in the first two years of operations, reducing the cost of international connectivity by a factor of 100, putting together the finance structure of the submarine cables linking Angola to Brazil and the USA, and installing and operating the cables and data center in Brazil successfully. 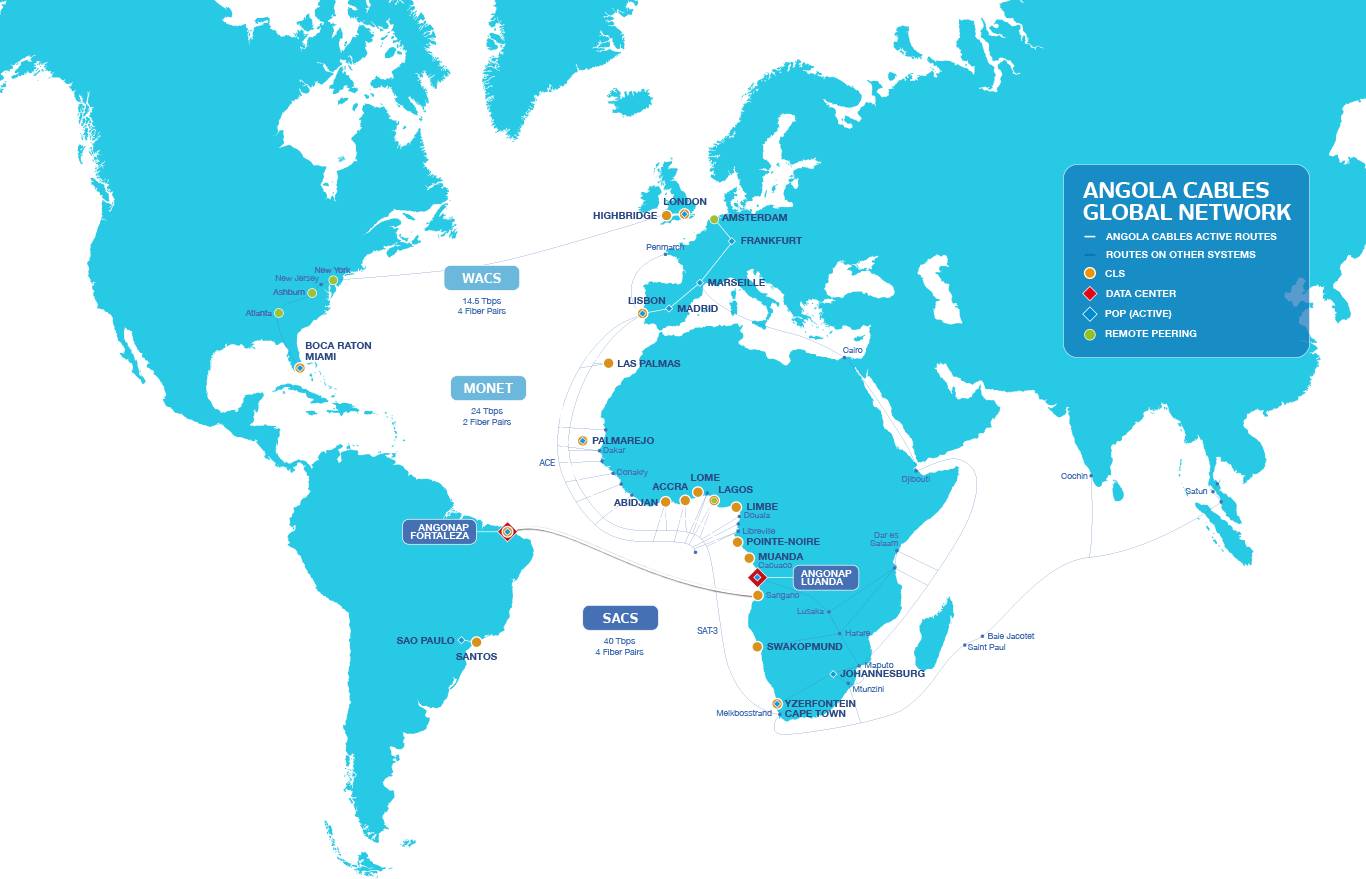 In what ways has Angola Cables influenced the development of Interconnection?

From the moment that SACS and MONET cable systems became operational and linked to WACS, Angola Cables has had a unique value proposition, with a connectivity ring across the Atlantic region interconnecting the Americas, Africa, and Europe – the so-called “one-stop-shop”. One great milestone has been that Angola Cables is the first and so far only option connecting Africa to the Americas directly, via SACS. This premium route offers efficiency and has the potential to change the global traffic exchange flow scenario. Today, we are well-positioned to fulfill our vision – which is to transform Angola into an African hub and maintain our contribution in developing the telecom industry.

"When we talked to DE-CIX, we had the sense that it would become a long term relationship."

When did you personally first come into contact with DE-CIX?

It was a long time ago, but my memory is that it was love at first sight. Angola Cables was tasked by the Angola Government with creating an IXP. We surveyed the international market, where DE-CIX turned to be the most capable partner, highly recognized in the industry and with great know-how. When we talked to DE-CIX, we had the sense that it would become a long term relationship. DE-CIX has taught us a lot, and they have leveraged us in the international panorama.

"The Internet will become increasingly globalized and humanity itself will be completely integrated into the world-wide-web."

DE-CIX fits the Angola Cables strategy as a partner. In fact, today, each company adds value to the other. DE-CIX is a world-wide reference IXP with several locations on different continents, and Angola Cables has a very good Atlantic connectivity ring, with its submarine cables, able to link DE-CIX IX points. Angola Cables is developing a world reference network, linking several continents. The bond between DE-CIX and Angola Cables is strong, and I’m sure it will continue for years ahead.

Where would you be today without Interconnection?

My background is electrical engineering. Electrical power is the basis of everything in the digital world. I just exchanged the copper and the aluminium for the glass and starting looking to the light. Electricity also had networks and interconnections long before telecommunications did. There we share power and internal data. So, coming back to your question, I think I would be involved in interconnection anyway.

25 years from now: What will the Internet be like?

No one can imagine a future without the Internet. The Internet is the foundation for all upcoming digitalization processes. I predict that the Internet will become increasingly globalized and humanity itself will be completely integrated into the world-wide-web, with those external to the network becoming outsiders. 25 years from now, the Internet itself and technologies based on the Internet will become commonplace, and at the same time the DNA of our lives. By then, it will be considered a human right and a natural basic need that must be universally provided to every person.