Bringing the outlying regions online for the modern Internet with fiber-optic networks, and connecting them to the world through DE-CIX hubs, still has the energy and spirit of the visionary early days of the Internet, explains Wolfram Rinner, Managing Director of GasLINE.

I was 28 years old and fresh out of university. I had my first proper job in Stuttgart working as an engineer on the development of the first private mobile phone network in Germany, at Mannesmann Mobilfunk, which took up the fight against Deutsche Telekom for market domination in this mobile network area.

That was the advent – the founding time – of mobile communications, when mobile communications were not yet a mass product, when it was simply about building as many base stations as possible. It was an exciting time, because the topic speech on the road came up, and that was already impressive. In 1993, when I started using a mobile phone, you still made a phone call on a device the size of a briefcase, by 1995 the device could be installed in the car, and I think the first mobile phones – really mobile – came onto the market that year. In addition the first text messages were possible, but the topic of data services was still completely unknown at that time.

Why did you decide to join this industry? 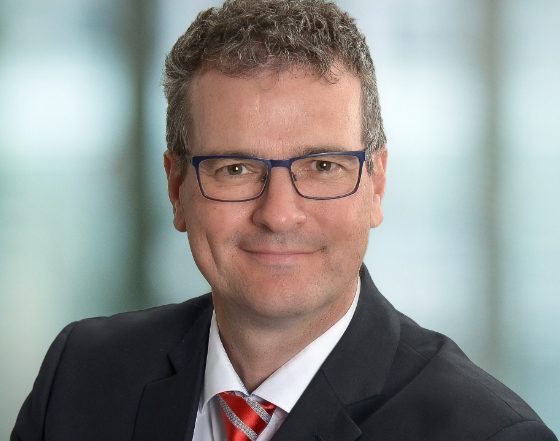 It was crucial for me – I saw that it was a forward-looking industry. I already thought that the topic of mobile communications was the stuff the future, but I would never have thought it possible for it to become so big. When I started in 1993, I made the bet with the supervisor of my thesis for my engineering degree. He thought that in five years the network would be built up and we would all be out of a job again. But I said no, we will not be unemployed in five years – it’s going to go further. And I was right, thank God!

And what devices did you have at that time?

On duty, I was equipped with an Ericsson GH172 mobile phone, the competitor product to the Motorola P1. I was so proud to walk around with the device at home, with my parents, in our circle of friends. Honestly, I have to admit, I did show off a bit with it! Owning such a device at that time was something very special.

And yes, it made working life a lot easier, because we were on the road a lot, searching for locations for further mobile stations, and these devices represented a whole new way of working together. Rather than waiting to get home and put everything on paper and then send it back, we could also get and give information on the road by phone. This was really a quantum leap in the sharing of information.

"That was revolutionary for me, a real “aha” experience."

For you personally, when did you realize how important the Internet would be?

I really realized when I was in the US shortly before the turn of the millennium. I visited an old school friend there, and we planned our trip through the US for the first time via the Internet. We booked tickets for a plane in order to travel to Las Vegas the next morning. The hotel reception arranged the flight booking outside of normal office hours without involving a travel agency – it was possible 24/7 via Internet: that was revolutionary for me, a real “aha” experience.

“I was looking for a new challenge, for the opportunity to experience the pioneering spirit again.”

If you look back from today, what are the milestones in the development of the Internet that inspire you most?

What I personally love most is the introduction of smartphones. Apple really revolutionized the market with the introduction of its product, putting the user at the center of attention. I would never have thought it possible for people to book their journeys using smartphones in 2020, actually organizing their entire life – which was previously done on paper. The introduction of the smartphone, I think, was the biggest milestone in mobile communication.

How did you personally contribute to the development of the Internet?

In my professional work on network expansion, I was personally from developing and planning network design, to the monitoring of their deployment, and on to the operation of diverse networks. Then, I was personally involved in the expansion of the mobile Internet from 2006 onwards, when Vodafone took this over, and in 2008 also in the field of fixed-line networks. I was responsible for the expansion in the Frankfurt region, and so I was able to drive forward the topic of Internet.

After 23 years working for Vodafone, I was looking for a new challenge, for the opportunity to experience the pioneering spirit again, which I had enjoyed in the early days at Mannesmann. GasLINE could offer me this, as it was massively involved in network expansion in Germany, also expanding fiber-optic to rural areas in order to supply digital infrastructure, and really providing the broadband basis for the modern Internet.

Can you explain the origin of the name GasLINE?

The name GasLINE comes from the fact that we were founded in 1996 by 15 regional and grid gas suppliers. Hence the company’s name includes “Gas” because we have a number of gas parent companies, while LINE should point out that we get fiber optic compounds into the ground, spread all over Germany with our large backbone.

The origins: The Managing Director of Ruhrgas had a groundbreaking idea, from my point of view. The opening up of the telecommunications market was on the agenda in 1998, and as a gas supplier, Ruhrgas had gas pipelines across the Federal Republic, and they also had the right to bring cable protection pipes into the ground along its gas pipelines. The advantage here was that large and yet securely deployed network capacities could be laid quickly in the right-of-way in the protection zone along high-pressure gas pipelines. So, the Managing Director of Ruhrgas said, “let’s bring our grids together. Let us work together to establish a comprehensive cable protection pipe system across Germany in line with the opening of the telecommunications market”. It was a really brilliant idea from him, because he really implemented the cooperation model extremely well. All major gas suppliers in Germany contributed infrastructure to this network, under the leadership of Ruhrgas, and that was the birth of the new company GasLINE.

"We have been supplying the 'data highway' for transportation especially since the telecoms world started migrating to the Internet Protocol."

After the telecommunication market deregulation in 1998, GasLINE was one of the first infrastructure providers to market fibre optics in the wholesale business to the carriers operating in Germany. Today we are still one of the major fibre-optic infrastructure providers in Germany, boasting a comprehensive, nationwide network with current route length totalling more than 28,000 km. This is being continually developed and expanded, with a further 3,000 km planned by end of 2022. We have been supplying the “data highway” for transportation especially since the telecoms world started migrating to the Internet Protocol (IP). One significant recent development is that our customers in the mobile network business are making use of these dark fibre routes for connecting their antenna locations as part of their 5G network development.

GasLINE has really evolved for the last 25 years, and in the recent years has also been investing massively in the topic of grid growth, network expansion, so that we are truly a stable backbone for broadband coverage in Germany. 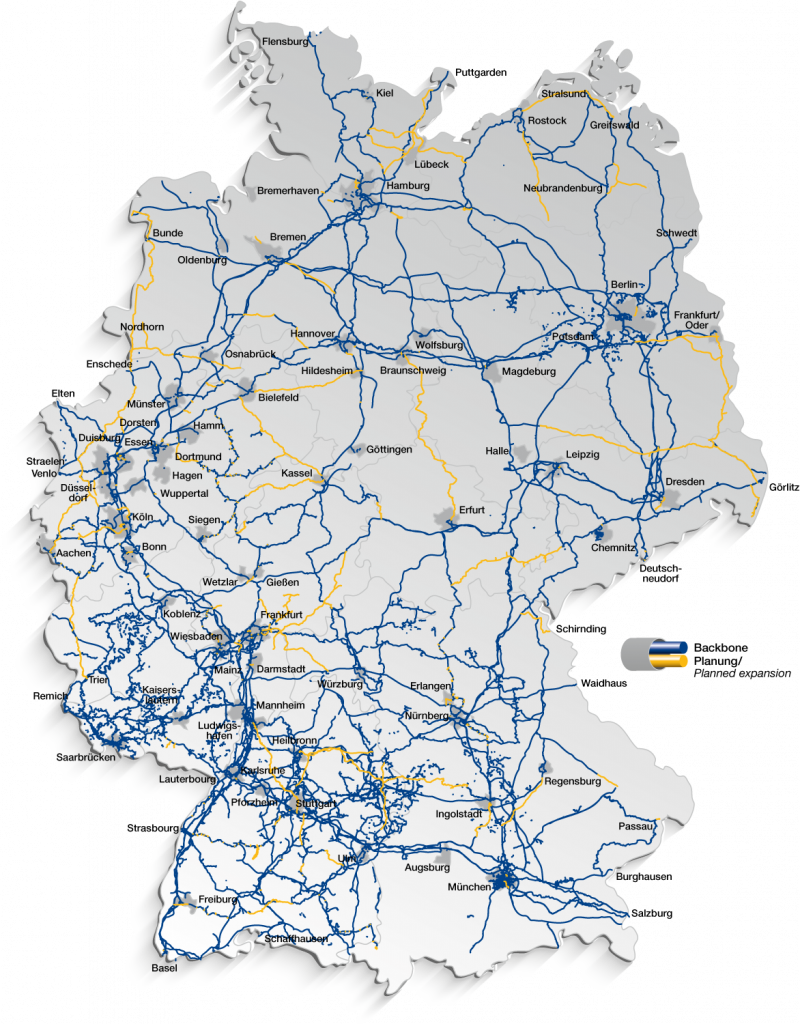 When it comes to network expansion, tell us the relationship between GasLINE and DE-CIX.

A substantial number of our customers (80 or 90% of them, especially when they come from outside Germany) want “to go to” Frankfurt with physical connections based on dark fiber or managed bandwidth, in order to be connected to DE-CIX. DE-CIX is the center of the Internet business in Germany, the largest Internet Exchange, and that’s why we have a very close relationship. Given the strength of the ecosystems that develop around their Internet Exchanges, DE-CIX has the magnetism to draw customers in.

How does DE-CIX fit into the overall strategy of GasLINE?

“DE-CIX has the role of the heart, and we are the blood vessels out into the regions.”

As the world’s largest Internet Exchange and as a central component of the Internet, DE-CIX has been indirectly a part of GasLINE’s growth strategy for many years. Carriers and Internet service providers have always been a key customer segment, and they peer directly at DE-CIX. With its dark fibre connections on the required routes, GasLINE provides the feeder lines for their IP traffic.

I’d like to devote a moment to the importance of interconnection. In the meantime, it has become extremely easy to connect data at a high speed between distant points on the globe, by means of the fibre-optic networks and by means of DE-CIX. Here, DE-CIX has the role of the heart, and we are the blood vessels out into the regions. For the modern communication between companies, between individuals, organizations, this is like the backbone – it is what is needed for data exchange to work.

Without the Internet: What would you miss the most?

The possibility of getting important things done at any time, regardless of where I am: making purchases, booking hotels and flights, exchanging information across the miles to maintain friendships. In short: connecting with people who are not nearby. Organising the club of life would be unthinkable without such electronic media.