Shrinking the world by improving communication

The Network Engineer and musician has been at DE-CIX since February 2019 and loves the international environment and DE-CIX’s heady global growth.

Fırat, what are your main daily tasks?

One side of the work is doing NOC shifts; taking care of the alarms coming from our monitoring systems and providing the Customer Service department with technical support, and planning the maintenance of our network.

I also work on upgrade projects, so carrying out system upgrades of network elements and  doing layer 1, 2 and 3 network installations. We work on all network devices, from cables to patch panals, Linux servers to routers and all the configuration of these network elements. Actually, configurating routers is my favorite task; something I’ve been doing for more than 9 years.

“We choose the best network set up, work with the best local partners, and introduce and use the latest technologies such as the patch robots to the sector.”

How does your daily work contribute to DE-CIX’s mission of providing premium network interconnection services?

“The best thing about working at DE-CIX? Touching so many parts of the world.”

We work directly on the network devices and all DE-CIX’s customers’ data passes through the devices we configure and maintain. We choose the best network set up, work with the best local partners, and introduce and use the latest technologies such as the patch robots to the sector. On a personal note, using my prior experience in the sector that I gained in a network company that had tens of thousands of employees, I proposed some new features to our network, and those new features are now actually used in our systems.

What is the best aspect of being part of the DE-CIX team?

Touching so many parts of the world: By working here, I get to work with people from all around the world; connecting customers from Indonesia to India, from Europe to the USA. This makes my everyday work very international, very interesting, and exciting. Here at DE-CIX, the managers really look after employees and make good decisions for the future of the company in terms of investments and expansions.

What did you do before coming to work for DE-CIX? 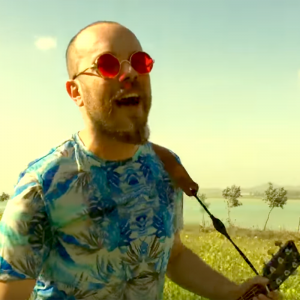 Before I started working at DE-CIX, I studied MSc in Electrical Engineering and Information Technology at the RWTH Aachen University and joined DE-CIX after graduation early last year. Prior to starting my Masters, I had worked for eight years at Türk Telekom, the first integrated telecommunications operator in Turkey, as an IP Systems Engineer at Headquarters which conducts the IP/MPLS employees whose number reaches maybe thousands. I first heard about DE-CIX from colleagues at Türk Telekom, which is both a customer and a service provider for DE-CIX.

I’m not just a network engineer; I am also a singer and song composer who has an album on Spotify, video clips on Youtube, a lot of concert experience, and hundreds of songs. Music and singing is my dream since childhood and I could never imagine living without it. I can  describe my passion thus: "When I die, one of the things that will hurt me the most will be the fact that I can't make music anymore".

Last, but not least, I am also a lover of science through and through and a full-time supporter of the distribution of correct information and facts. For some time now, I’ve been one of the content providers for Turkey’s biggest science website Evrim Ağacı which means “evolution tree”.

“Right now, I’m excited about the announcement of the investment in the new locations in Malaysia and Singapore, because this allows us to reach a vast number of customers in the ASEAN region.”

Which were your favorite milestones in the development / history of DE-CIX?

What do you think interconnection will look in 25 years?

We, as IXPs, are shrinking the world by improving communication. We’re lowering latencies between two end points, which lets new technologies like 5G and IoT grow and deploy faster. The Internet will bring us all closer and let us communicate in ways we can’t even imagine today.

Looking back, what was life like for you 25 years ago?

In 1995, I was in junior high shool in my home town in Turkey. I was playing football and making music and composing songs. I didn’t have my own computer until 2003, there wasn’t even one in school in 1995. When DE-CIX was founded, computers and the Internet weren’t part of my life yet. I first started using computers in Internet Cafés around 2000/2001 to play video games like Counterstrike and Age of Empires. That’s when I decided I wanted to work with the Internet, before that I had wanted to become a doctor.

What – for you – are the Internet’s key moments and major achievements; the highlights, the peaks, the milestones etc.?

One of the biggest highlights, from my perspective, was the first submarine fiber connection that was laid between Europe and the US; connecting the Old World and the New World.

Antoher one was the invention of routers and router protocols, as this allowed us to transmit large amounts of data. We’re now breaking records in the volume of data being transmitted and this is only possible due to routers.

The third highlight would have to be the recent developments in data storage capabilities. Without storage, it wouldn’t be possible to transmit such large amounts of data. Being able to do this simplifies communication; it shrinks the world, it brings people closer and enables new technologies like 5G and IoT.